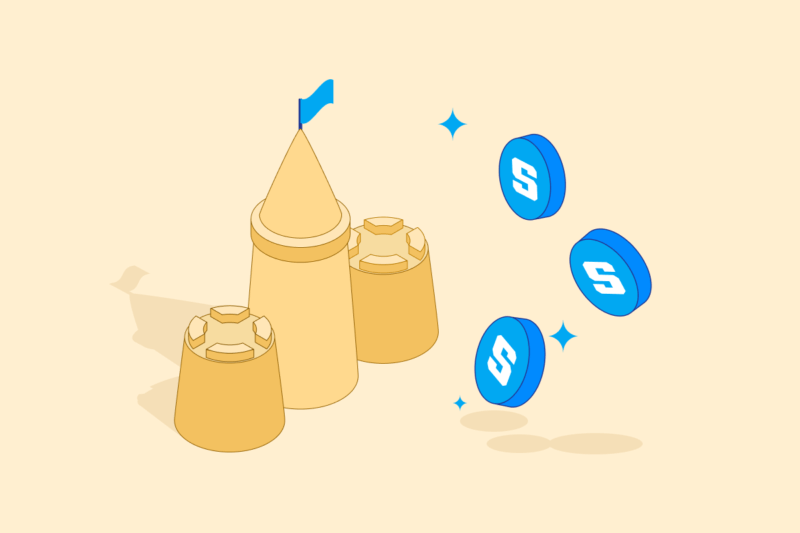 The gaming world is starting to evolve, and blockchain technology is helping to shape its growth. The Sandbox is one of the most prominent metaverse projects around. The game draws elements from popular video games such as Minecraft and Roblox and allows monetisation of user creations.

This article will dig up The Sandbox metaverse including the SAND token, LAND, and how the user-generated content ecosystem functions. The article will also explore Alpha Seasons and the season pass, and the role they play in the Play to Earn feature.

What is The Sandbox?

The Sandbox is a community-driven gaming metaverse, which utilises blockchain technology including non-fungible tokens (NFTs) and digital currency. Players are able to create, own and monetise digital assets and experiences on the Ethereum blockchain using The Sandbox’s utility token SAND.

The Sandbox also incorporates a Play to Earn model, where players can earn SAND by participating in events and completing in-game quests.

The Sandbox has over 50 partnerships to develop content in the metaverse. Recognised brands include The Walking Dead, Adidas, Snoop Dogg, and The Smurfs.

The Sandbox was originally a mobile game platform that drew inspiration from existing gaming giants like Minecraft and Roblox. In 2018, co-founders Arthur Madrid and Sebastien Borget decided to shift their enterprise into the realm of blockchain. This allowed creators to possess true digital ownership of their content as NFTs and receive rewards for their contributions.

How does The Sandbox work?

The Sandbox marketplace is a web-based marketplace where users can purchase and list ASSETS, which are player-created NFTs that exist in various forms and different rarities. ASSETS can include equipment, entities, buildings and decorations which can be used within the in-game world.

The Sandbox game is also interoperable with avatars from third-party creators like Snoop Dog and World of Women. Users can use their avatar collection from supported creators to interact with The Sandbox game. Users are able to explore avatars on The Sandbox marketplace that are listed on secondary marketplaces.

1. Screenshot of The Sandbox Marketplace

The Sandbox game consists of ASSETS that are made up of building blocks called voxels.

The Sandbox provides users with a free voxel editing tool called VoxEdit. Users can use VoxEdit to create and animate ASSETS without any coding knowledge. Users also use VoxEdit to add attributes and define rarity through the use of GEMS and CATALYSTS.

2. Example of an ASSET

GEMS and CATALYSTS are ERC-20 tokens that are burnt on usage. GEMS are objects that give an asset up to 25 points of a certain attribute. There are five different types of attributes – power, defence, speed, magic, and luck. Adding a GEM to an asset requires a CATALYST. CATALYSTs come in four tiers: common, rare, epic and legendary, which define the number of GEMS able to be added to the CATALYST.

The Sandbox isn’t one game, but a collection of 3D games and experiences created by the community. Sandbox Game Maker is an engine that allows users to create these experiences by using ASSETS that they have acquired or created. You do not need to be a fully-fledged game designer to use Game Maker, the program is simple and easy to use that does not require coding knowledge. However, for newly created experiences to be publicly accessible, creators will need to have purchased or rented LAND.

The Sandbox foundation also has the Game Maker Fund and Creator Fund which are intitives that offer game developers incentives for publishing their projects on in the sandbox Metaverse.

4. In game screenshot of The Sandbox game

The Sandbox metaverse is split into sections called LANDs, which are creative spaces for users to display their games and experiences. There are 166,464 (408*408) LANDS in total, 10% are owned by The Sandbox team to host special events, and 16% are held in reserve for partners, creators, and gamers as rewards. The rest (74%) is available to the public. Multiple LANDS are able to be combined to form bigger spaces called ESTATES. The largest ESTATE being 24*24 LANDS.

5 Section of the LAND map of The Sandbox

The Sandbox has held four LAND presale events. LANDs in each event were sold out in a matter of hours. Two thirds of all LANDS in the third presale were sold out in the first 30 minutes alone. Currently, LAND can only be purchased on a secondary marketplace called OpenSea with a floor price standing around 1.3 ETH.

SAND is an ERC-20 token that resides on the Ethereum blockchain, it acts as governance token and currency that powers The Sandbox ecosystem. Owning SAND also allows participation in the governance of The Sandbox metaverse by creating and voting on proposals through a decentralized autonomous organization (DAO). SAND is also used to access certain features in the game, purchase In-game ASSETS and LAND tokens on the Sandbox marketplace, and pay for transaction fees.

The Sandbox also allows staking of SAND tokens for users to earn rewards. Users can provide liquidity of SAND and MATIC to earn LP tokens. These tokens can be staked to earn rewards from swapping fees.

How to play The Sandbox

The Sandbox is a Free to Play metaverse that is continuously changing. There is no correct way to play The Sandbox. Players can socialise at events, explore landmarks, run a business, and play games all within the Sandbox virtual world. The Sandbox is free-to-play, but some features may require payments in SAND to be accessed.

The Sandbox game can be downloaded on Mac and PC, a stable internet connection is required to play.

Currently, The Sandbox project is not an official full-release game. The Sandbox team are using Alpha Seasons to collect feedback from the community. Alpha seasons are limited time events that lasts for a couple of weeks. During this period, players are able to participate in new games and experiences, with the opportunity to earn SAND in Play to Earn rewards.

There have been two Alpha Season events in the past, with a third event in the works. In Alpha Season 1, players required an Alpha Season 1 Pass; a ticket in the form of an NFT, which grants the player full access to the experiences and receive play-to-earn rewards. Season 1 Alpha Passes were quite difficult to acquire. Players could only obtain them through owning LAND, social contests, or purchasing them on OpenSea.

The Sandbox has announced that it will migrate its NFT ecosystem from the Ethereum mainnet to the Polygon sidechain. The move to Polygon will significantly reduce their carbon footprint. Additionally, players can benefit from much lower minting and trading fees, and faster transactions.

Alpha Season 2 operated differently to Alpha Season 1. To elicit more participation and receive feedback from a wider community, anybody can access all of the limited time experiences, regardless of whether they hold an Alpha Season 2 Pass. On top of that, The Sandbox team has made the game compatible with Mac, users who own a Mac will be able to participate in Alpha Season 2. Players can obtain the season 2 pass through raffle, social contests, or purchased on OpenSea. Raffle tickets can be accumulated by completing in-game quests, as well as by holding certain NFTs, such as LANDs and Alpha Season 1 passes.

How to buy SAND

You can buy SAND from most big cryptocurrency exchanges. Swyftx is a popular crypto exchange in Australia and New Zealand where users can buy SAND with low fees and store it in their personal crypto wallet.

The Sandbox is a metaverse that incorporates a user-generated content ecosystem. This project is made possible through the use of blockchain technology, NFTs and cryptocurrency. Users are able to use free tools to create digital assets and experiences and monetise them on the marketplace. Alpha Season events are growing larger each season alongside the community. The Sandbox and its community have great influence in the metaverse space and is one project to keep an eye on.